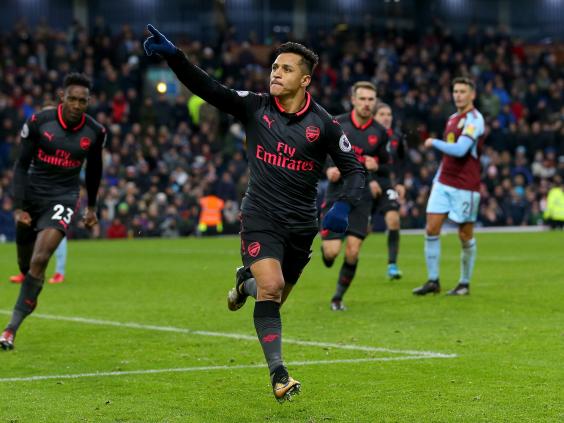 At some point, their luck was bound to run out. No Premier League team has conceded more shots than Burnley this season, but few have defended their goalmouth better.

For more than 90 minutes of this visit from Arsenal, it was much the same story, with Sean Dyche’s side putting in a typical display of dogged but rarely desperate defending.

It seemed as if Arsene Wenger and his players would return to north London with nothing to show for their long spells of domination but deep into stoppage time, the otherwise excellent James Tarkowski made his first real error of the afternoon.

Lee Mason’s decision to penalise the Burnley centre-back for a push on Aaron Ramsey was debatable, but Tarkowski should never have given him the option. Alexis Sanchez squeezed the spot-kick past goalkeeper Nick Pope to snatch the three points.

The two sides began the day level in the table, which in itself paid testament to the remarkable start Burnley have enjoyed this season.

Victory would have lifted them above both Tottenham Hotspur and Liverpool and into the top four, but thanks to Sanchez’s late penalty, it was the visitors who closed the gap on the leading pack.

Arsenal arrived just 50 minutes before kick-off after their team coach became caught up in a spot of heavy traffic and then started the match as if still trapped on an east Lancashire dual carriageway.

All the early energy and intensity was Burnley’s and when Nacho Monreal appeared to nudge Ashley Barnes inside the penalty area as the striker prepared to connect with one cross, the hosts could argue they deserved a spot-kick

The closest Dyche’s side came to capitalising on this early momentum was through the impressive Johann Berg Gudmundsson, an often-underrated cog in the Burnley machine.

His crossing from the right had already caused Arsenal problems when, after a quarter of an hour, he jigged past a static Monreal and sent a stinging drive towards goal. It cannoned back off Petr Cech’s near post.

This was turning into precisely the sort of encounter that Arsenal have struggled with over the years, but the visitors gradually began to make their superior talents tell.

Alexandre Lacazette started brightly and comprehensively beat the claret-and-blue backline with a teasing cross after darting down the left. Ramsey met it yards out from goal but blazed his first-time attempt over.

It was the only time in opening 45 minutes that Arsenal were allowed to shoot at goal without seeing several Burnley bodies blocking the path in front of them.

Sanchez was briefly granted a clear sight of goal just before the half-hour mark after more lively work from Lacazette, but a superb last-ditch recovery tackle by Tarkowski in the penalty area robbed the Chilean of the ball just as he was about to pull the trigger.

Burnley had lost much of their early momentum by then but would test their visitors once more before the break.

Robbie Brady went close to finding the breakthrough with a free-kick positioned a few yards outside the penalty area but Cech was equal to the winger’s effort, palming it away from his top-left hand corner.

With their early jitters now well behind them, Arsenal pressed on for an opener.

Sanchez found a route in behind Burnley a few minutes into the second-half and neatly played in Sead Kolasinac, who chose to evade a late Tarkowski tackle rather than tumble to ground. His reward for such honesty was to see his effort blocked then cleared.

Wenger’s side needed the type of invention Mesut Özil showed in last weekend’s north London derby, but their creator-in-chief was absent through illness.

Without him, Arsenal dominated possession but struggled for solutions when asked to break through Dyche’s deep-set defence. Sanchez took on the mantle of playmaker and one exquisite dink over the top provided Ramsey with a half-chance. Again, he shot well over.

For all Arsenal’s dominance in the second-half, they were forced to take a leaf out of their hosts’ book at one point. Shkodran Mustafi forced his way in front of Burnley’s best opening for some time, blocking a Brady shot from range after good work from Stephen Ward down the left.

Another Brady attempt from distance minutes later struck Laurent Koscielny’s elbow, sparking demands for a free-kick from the stands, but referee Mason was not listening.

Wenger called on Jack Wilshere as the minutes dwindled by and the midfielder came close to making a decisive impact.

Arsenal were running out of ideas and deep into added-on time, it seemed certain that the points would be shared, only for Mason to blow against Tarkowski and spark protests from the majority of Turf Moor.

Some members of the Burnley side were still arguing the point as Sanchez took the ball, composed himself, then nestled the spot-kick into bottom-left hand corner, just out of Pope’s reach.